The idea for the motifs in this book came from a request for something with a thistle that was smaller than the bookmark from my first book. Then, once I’d sorted out the thistle, it seemed a good idea to make three more motifs for the other flowers or leaves, in the case of the shamrock. However, because of other things in which I was involved, the project was put aside and I didn’t get around to putting the book together until 2006. 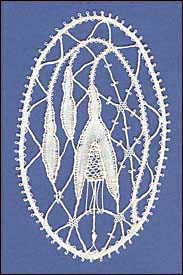 I had also designed a motif with a fuchsia for a workshop with the Lace Guild of Northern Ireland in 1995. I was asked for something different from the ubiquitous shamrock and, having now seen the wonderful fuchsia hedges in Ireland, I can understand why a fuchsia was suggested instead. I tried to fit the fuchsia into the same circle as the thistle but it just didn’t work so this one is an oval. One of my students has worked the fuchsia with added colour, pale green workers for the stalks and pink gimps and workers for the flowers and buds, and it looks very pretty.

Currently out of print