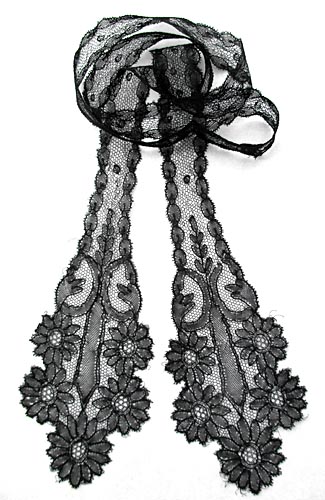 In 2010 I was visiting my friend Jeri Ames in Maine, USA, before teaching a class for the New England Lace Group. Together we made a trip to Hallowell where Jeri’s ancestors had traveled by ship in the 18th century en route to claiming land grants in Maine after the Revolutionary War. I later discovered that Hallowell had a link with the eighteenth century lace industry in Ipswich, Massachussetts — Elizabeth Lord Lakeman whose lace pillow is in the Smithsonian Museum, grew up in Ipswich but moved to Hallowell in 1793 (see The Laces of Ipswich by Marta Cotterell Raffel pp. 90–95).

While we were in Hallowell we went to a vintage linen shop, where Jeri frequently shopped in search of laces, and I pulled this black Chantilly lace tie out of a container of jumbled hankies, doilies, etc. It is typical of those worn in the late 19th century, probably around the neck, although it could equally well have been used as a sort of lappet decorating the head. As I had been looking for some Chantillly for my lace collection, and as it was also very reasonably priced, I bought it and brought it back to Glasgow with me.

This piece of lace does have one particular claim to fame. For several years it graced the home page of The Lace Guild website!