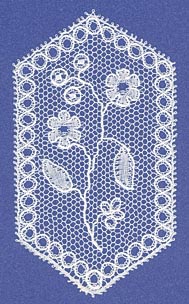 This motif is one of the pieces I submitted for The Lace Guild’s Intermediate Assessment in Bucks Point lace in 1987. I had already done some pattern drafting and made minor changes to existing patterns, but this was the first piece of Bucks Point that I designed from scratch. Although I might do some things a little differently now, I still like it. It was worked with Dragonfly glacé cotton No.140 and pearl cotton 8 as the gimp.

Not long before designing this piece I had worked my first sample of floral Bucks Point (shown below) using a pattern in Bobbin Lacemaking by Doreen Wright. I used all the bobbins I possessed at the time (about 50 pairs) and could have done with a few more. I was intrigued by the small six-petalled flowers in the pattern and wasn’t all that happy with the way I’d worked them, although looking at them now I think I was being over-critical! Anyway I tried working just these flowers in various ways, and once I’d found a method I liked decided to incorporate a couple of the flowers in a design of my own. 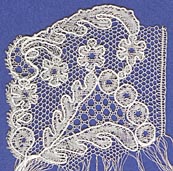 I first made a rough sketch, then drew a modified version on graph paper and started to fill in the dots. At this point I realised that the flowers would have a better, rounder shape if I drafted the pattern at 60° rather than at the 56° that using the graph paper would give. I found a 60° grid at the back of The Technique of Bucks Point Lace by Pamela Nottingham (no web versions to download back then) and produced a pricking which worked out very well. If you’d like to make the motif yourself, the pricking and instructions can be downloaded in pdf format. 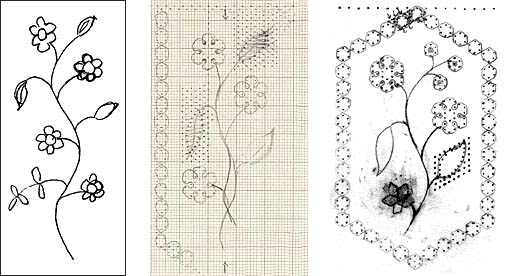 Left: The first rough sketch on a shopping list
Centre: Drafting a modified version on graph paper at 56°
Right: Drafting the final version on tracing paper over a 60° grid.
I hadn’t quite decided how to deal with the ‘fruit’