My daughter Ruth asked me to make her a little needlelace bag in shades of purple, her favourite colour. In the end only the flap of the bag was needlelace, but that meant I could also experiment with colouring fabric using transfer paints and get out my marudai to make a kumihimo cord. 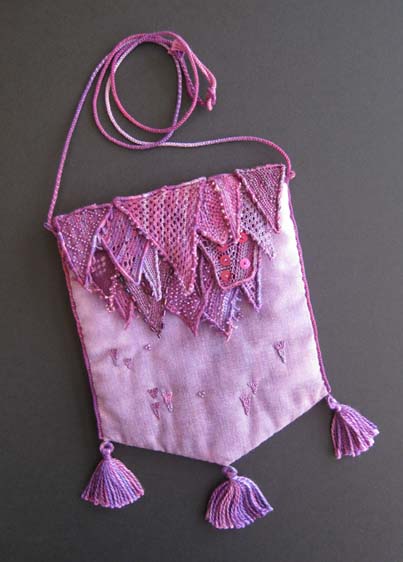 Bag decorated with needlelace — it is about 14 cm wide

As Ruth wanted shades of purple I decided that a sketch I had made of part of an amethyst geode would be a good starting point for a design.

My sketch of the amethyst geode

Taking the idea of the spiky amethyst crystals I made a collage using assorted papers, some painted, and even a small piece of bobbin lace.

I then traced part of the collage and worked it in needlelace using assorted threads and stitches. I enjoyed experimenting with new stitches and ways of decorating the padded cordonnet with picots and beads. I also found out which threads came apart when I stitched with them.

Tracing of part of the collage

When working the sample I had tried to stitch the padded cordonnet to give the effect that the triangles overlapped each other with some further away than others. I was not happy with the result and decided that the only way to get the effect I wanted was to work separate triangles and then assemble them in layers. And as this would not really be practical for a whole bag I also decided to turn the design around and use it for the flap of the bag. Working each triangle separately meant that the final arrangement did not have to be decided until I was ready to stitch them to the flap. I was also free to experiment with different combinations of threads and stitches because I could easily rework any triangle that did not fit in with the rest of them.

Most of the techniques I used were taken from Venetian Gros Point lace, although I also included a few that developed later. I used various types of thread — cotton, silk, linen, synthetic and metallic. 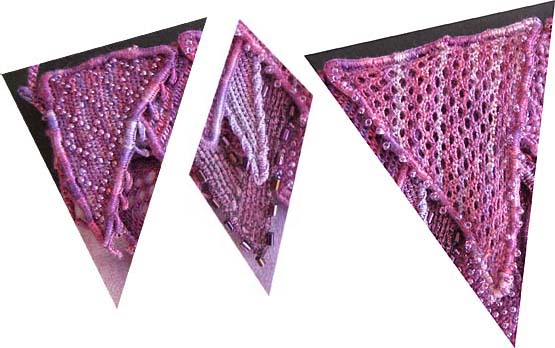