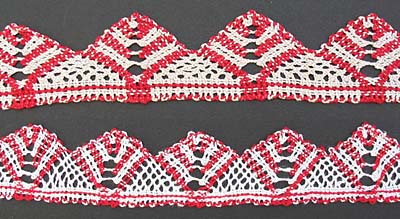 Original Mikailov lace (top) and my sample (below)

In contrast to the freehand laces described in the two previous articles, this one I worked from an actual piece of lace. I first saw the lace in the Lace Guild’s Colour in Lace Carnegie Folio and was intrigued by the way the colours had been used. At the time I had no idea that it might be freehand lace: I thought it was just Torchon lace made at an unusual angle (40°). Much later I discovered that Gil Dye had contributed the lace to the folio and still had a long length, from which she gave me some repeats. She had no idea where it came from, but I have since been told that it is Mikailov lace from Russia. I only realized recently that this lace included fixing stitches, and so made an attempt to see if it could be worked by freehand methods — the answer is that it can. My sample differs from the original as not only is the thread thinner, but I have ended up working at an angle of about 50° — although I intended to follow the original lace, this is what seemed to fall into place as I worked. 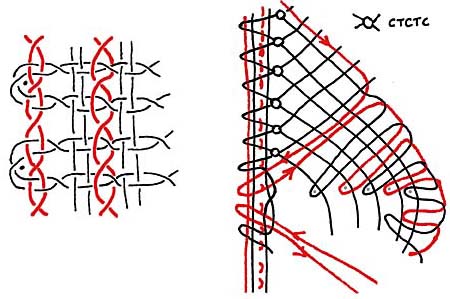 As with the other laces, I started with a diagram (above right). There were two red pairs in the footside, one worked as a normal passive with cloth stitch and twist, the other as a cabled gimp pair (above left). The third red pair alternated with the outer white pair as a worker for the fans. The order of working was a fixing stitch and then a line of ground. I used the open method of working so fixing stitches with a twist beforehand (tctctc) were worked where indicated, and the other stitches were cloth stitch with a twist beforehand (tctc). I worked with the footside on the left, as this is probably how the lace was made originally.

The fan was worked in cloth stitch, with the worker pair twisted once between each stitch. Although the exchange of worker and passive at the headside could have been achieved with a simple cloth stitch, the way it was worked in the original was more complicated (right), and this is how I worked my sample. I did use pins within the lace for the fans — these are shown as grey dots in the diagram. However, they were removed and replaced in the corresponding loop as I came to it in the second half of the fan. These pins were then removed one by one and used for the next section of the footside — in all, only about twenty pins were needed for working the lace.

Using pins in the fans like this results in the worker pair being pulled taut where it turns back in the first half of the fan, but small loops are left in the second half. This effect can also be seen in the original lace, so I think that it may well have been worked in the same way (above). 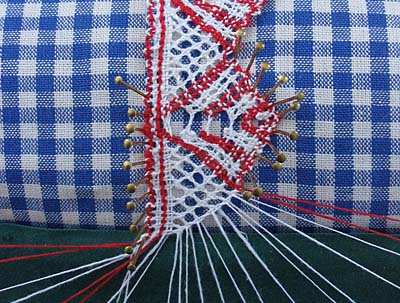 The twenty pins needed for working the lace