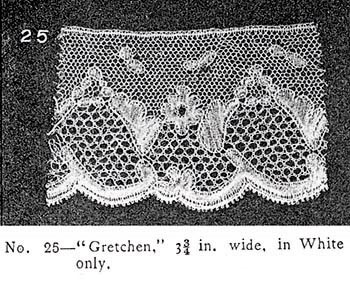 In the North Bucks Lace Association catalogue from about 1900 there is a pattern entitled Gretchen which is offered for sale at 10s 6d per yard (Fig. 1), one of the higher prices in the catalogue. I first came across Gretchen in The Technique of Bucks Point Lace by Pamela Nottingham, where it is used to explain various useful ways of working nook pins. Although I never got round to working this pattern, over the past 18 months I have acquired two examples of Gretchen and one near relative (Fig. 2).

I have also realised that there is a sample of Gretchen on page 20 of the Luton Museum Lace Dealer’s Pattern Book, and a related handkerchief edging in the Bucks Cottage Workers’ Agency catalogue (Fig. 3). 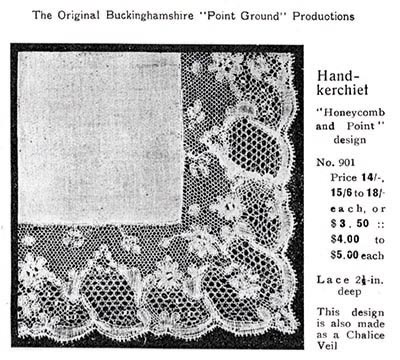 Fig. 3 A relative of Gretchen in the Bucks Cottage Workers’ Agency catalogue

Looking at how these various examples of Gretchen have been worked has been fascinating. For a start, the six little rings in a group are sometimes worked as honeycomb rings and sometimes filled with cloth stitch. The small motifs in the point ground are sometimes all cloth stitch but can also be partly worked as a honeycomb ring. In most examples one of the areas of honeycomb filling has cloth-stitch mayflowers, but these are missing from the one in the North Bucks Lace Association catalogue — was this because it was quicker to work the pattern without them? The related pattern from the Bucks Cottage Workers Agency has tallies in honeycomb instead of mayflowers — some lacemakers would say they would take much longer to work than mayflowers!

The position at which the gimp around the motifs in the ground has been finished indicates the direction in which the lace was worked, and four out of the five samples where the gimp finishing could be seen were worked in the same direction. The exception was my own piece that I call ‘double Gretchen’ which I found at the 2012 OIDFA Congress in Caen. Perhaps this piece was made in France rather than in the East Midlands. The question then could be which way did the pattern travel — England to France or vice versa?

Looking at the headside in all the four old samples (the three in my possession and the one in the Lace Dealer’s Pattern Book) it is clear that apart from where pairs accumulate in the ‘valleys’, there is only one headside passive, and in one case not even that (Fig. 4). The single passive is sometimes twisted and the extra passives in the valley are sometimes bundled together (Fig. 5) rather than being worked in cloth stitch. 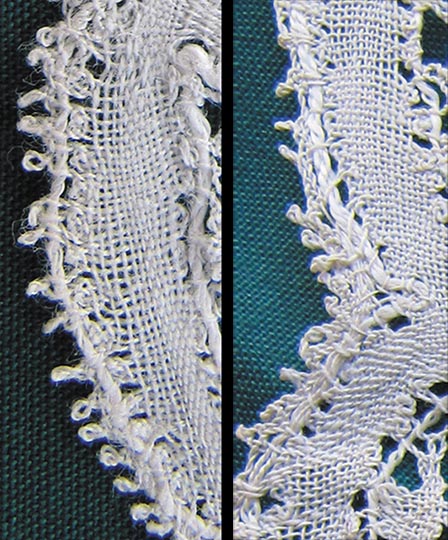 In the Lace Dealer’s Pattern Book sample the worker pair from the cloth stitch area next to the headside is used to work picots in many places, but in my three pieces the picots were always worked with passive pairs that moved out from and back into the cloth stitch. Perhaps you are wondering how much 10s 6d in 1900 would be worth today. There is a useful website (www.measuringworth.com/ppoweruk/) which explains the various ways in which relative worth can be calculated, and the one that seemed most appropriate here was how affordable something would be to an average person. The answer was that spending 10s 6d on a yard of lace in 1900 would be equivalent to spending £189 today*.

This article first appeared in Lace 153 January 2014*, pp. 26–27, missing a block of text which had been lost during the typesetting of the magazine. The web version here, and the downloadable PDF, were prepared by me and are complete.