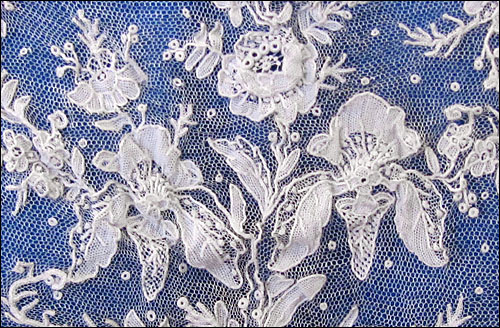 In the higher quality pieces the thread was finer and the stitches were closer together but the techniques did not vary. Some of my observations were what I expected, but others surprised me. I’ll deal with them one at a time. (In the diagrams I have drawn the stitches as they appear if you work upwards with the needle pointing away from you — the Continental method. Turn the diagram upside down if you’re used to working the other way.)

All the pieces had the typical point de gaze mesh ground, where the stitches have a different number of twists on alternate rows but all the twists are in the same direction — always right over left (Fig 1). In order to get exactly this ground you have to work in the directions shown. (Try it and see — if you go the other way you get left over right twists.) I have never seen any explanation of why the mesh ground has a different number of twists on alternate rows, and had thought this rather strange until I came to try and work the ground. Then I realized that when working in both directions the same thread manipulation each way gave three twists in one direction and two in the other (Fig 2).

In the older Alençon mesh ground twisted stitches were worked in one direction only with a whipped return thread (Fig 3), and to me it seems probable that when the decision was made to diverge from tradition by working twisted stitches in both directions, the typical point de gaze ground was produced by carrying over the time-honoured method for forming the stitch to the new direction.

These were worked in corded stitch with the loops closed right over left (Fig 4). Again you have to work in the direction shown to get this result. If you accept that working from left to right is easier than vice versa, I think this provides good evidence that the point de gaze lacemakers did indeed work stitches upwards with the needle pointing away from them.

There were always a large number of padding threads which were of about the same thickness as the thread used for making the lace. They were fastened down with spaced buttonhole stitches (Fig 5 Left). Sometimes, particularly on added petals, there were loops along the raised edges. These were made by working twisted stitches instead of single ones (Fig 5 Right).

Fig 6 Twisted stitches worked
on both sides of Ardenza bars

In the sprays of flowers which decorate point de gaze lace there are often stems with rows of loops along each side. Although they are known as Ardenza bars, in all the pieces that I looked at the loops were in fact made by working twisted stitches, not Ardenza stitches or knotted stitches (Fig 6). The stitches often looked knotted, but this was because they had been pulled tight.

These were made with twisted stitches instead of the usual single stitches (Fig 7). I was surprised by the difference that this made.

These were attached with long tacking stitches from the underside of the lace, and not with buttonhole stitches.

The techniques described here are illustrated in a piece of point de gaze from my collection in the Collection section. In the Lace section you can see a point de gaze rose I made after researching these techniques.

I am very grateful to Liz Arthur, the curator of the Costume Collection of Glasgow Museums, for letting me have such ready access to the reserve collection of lace. I have certainly learned a great deal and I hope that other people will also find my observations interesting and useful.